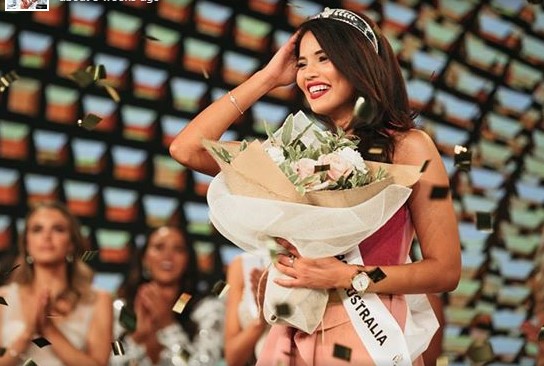 Hey, here is some awesome news coming out of Oz. For the second year in a row the MISS UNIVERSE AUSTRALIA title has gone to an Asian Australian. This year we see Victorian PRIYA SERRAO taking the title who in addition of winning the national competition is about to be admitted as a lawyer to the Supreme Court of Victoria and is currently working in the public service.

In 2018, it was Sydney’s FRANCESCA HUNG who took the title and this year we see SERRAO winning the top spot beating out 27 other competitors. This definitely shows that the world is sick and tired of seeing the typical and stereotypical blonde, blue eyes, beach look and is now looking for more diversity in the competitors it chooses.

Serrao was born in India and immigrated to Australia with her family when she was 11. Australia approved her mother’s visa, so hence Australia became their choice of home rather than Canada. Serrao is not just an academic high achiever, but she also volunteers her time to charity and did this during her gap year. Here is more of what she said to The Age:

“I’ve been pretty exhausted because I only had an hour of sleep last night, but I’ve just had a nap and I feel great,”

“Honestly, if I’m working to benefit a huge group in any way, it doesn’t matter whether it’s as a government employee, a lawyer or whatever – as long as I feel I’m giving back in some way, that’s what I want to do,”

“When I got through the first stage I thought, ‘Do I really want to spend my resources, my very limited resources, doing this?'”

“But in the end I decided the benefits outweigh the cons. The platform and the opportunities you get, I will never have an opportunity like this again so I just decided to have a go.”

Congratulations to Serrao and we will definitely be following her journey to the MISS UNIVERSE competition!