This is an opinion piece written by Guest Contributor Davita Lien. Davita is a uni student studying in Queensland and an organiser with the Asian Australian Alliance.

I love being Australian, and I love this country just as much as the next person, but Australia is a country fueled with racism. Loving your country does not mean you ignorantly claim that it’s perfect, it involves working towards making it better by recognising its flaws and educating one another. I wanted to be a voice for minority Australians, so I joined the Asian Australian Alliance and wrote this article to both educate people and let others know that they are not alone.

I remember an incident where I was learning to drive using my mum’s car, while my grandparents were there to supervise me. When I stopped at a traffic light, a pair dressed impressively in ripped gym clothes stared my grandparents down through the car window from the pedestrian crossing. When they passed by, they came up to the car window and yelled, “Hey coronavirus!! Go back home!!”.

A  familiar burn in my head flared up and my heart pounded out of my chest. I swerved the car back towards them in an attempt to catching up to them. In my anger, I could hear my grandparents begged me to “let it go” and I later came to regret not listening to them as I missed the parked car in front of me, and crashed my mum’s car during my last hours as a learner and a ruined a birthday for my grandpa.

Although the outcome was less than desirable, thinking back, “letting it go” also didn’t seem like a solution either. The question was why?

Could it be the experiences of racism I faced growing up? I am Australian born and raised, and I identify as Australian and Taiwanese. I wasn’t always accepting of my latter heritage, due to internalised racism and growing up here in Oz meant that I endured being mocked, teased and jeered at for how I looked.

At school,  kids would stretch  their eyes at me, and I would commonly get asked if I could see with my “tiny Asian eyes”. I would get leftovers of my favourite homemade meals from my grandma and my favourite snacks to take for my school lunch, but I hated it and I wouldn’t eat at all, feeling ashamed and different. I refused to carry anything from home that had Chinese symbols and even repented the word “Chinese”. That was the extent of my internalised racism and self hate.

As I grew older, people would tell me that I didn’t “seem” Chinese, and I would take this as a huge compliment because it meant that my mannerisms had become white enough to weave out my Asian ones. I was judged for who I was and what I looked like that I convinced everyone to like me by hiding as much as I could about my Asian race and culture. With that, I was inauthentic to myself and my ethnicity, I became no better than the judgments made about me.

My grandfather immigrated to Australia in the late 80s, and my mum and my aunt came to live here on their own as teens. Multiculturalism was unheard of back then and being told to “go back to where you came from” was said on a daily basis. Although racism is more frowned upon now, Anti-Asian is still a very real issue in Australia.

As an Aussie born, I was given the opportunity to live a life with more freedom and access to education. My loving Asian family taught me over the years that self-respect was the only respect you need, and I’ve finally understood what this means.

For the longest time, I have always felt that I lacked a sense of belonging, being “too white” for the Asian culture and “too Asian” for the Australian culture. I was judged for my physical appearance and who I was from the get-go. This developed into fear and shame of my Asian heritage. Growing up I thought I was afraid of being a part of my culture and accepting my Taiwanese identity, but recently I’ve realised that what I’ve always been afraid of was people, the hate and the xenophobia, and that I need to re-learn what I was taught by my family about having “self respect”.

I am 20 years old now and all I can say that I am extremely lucky, despite the presence of a global pandemic being blamed on Asians. The racial attacks I have experienced are minor and made by small-minded people. Other stories and experiences I have heard, however, haven’t been so lucky.

A vile Instagram post shared by a close friend of mine is the very tip of the iceberg of what is being said of us: 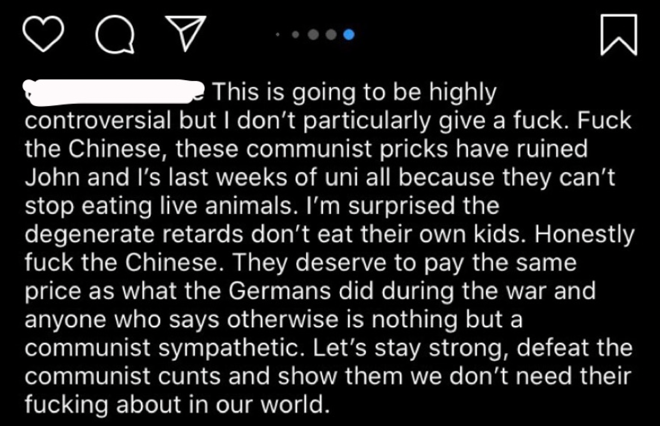 Racial violence in every shape and form is happening in Australia every day, and people are being targeted everywhere they go, wondering whether a comment or a rude gesture was received because of how they look. Since COVID-19, it’s been even harder to stand up for oneself and most see it easier to just “let go” after experiencing an incident of racism. What many do not realise is that by ignoring this problem it becomes worse and more corrosive.

Some people may say that I am being too sensitive and over-reacting, and most of the time micro-aggressions are barely noticeable, but to the prejudiced it is so plain and obvious.

This isn’t about Gen Z being fragile and oversensitive on topics of race and multiculturalism, this is about claiming back the self-love lost to the hatred of others for our “a-gong (grandpa), a-ma (grandma), jiā rén (family members)” and our future generations.

I have come to the realisation, that I live in a world where racism is well and alive. I am afraid of the next racial attack I may experience or the next time I may have to stand up for others. However, I have also realised that I do not need to feel like I belong into any racial mould, I am comfortable being myself.

I can semi-speak the Chinese language with my Australian accent and dip my fingers in a jar of vegemite while taking my shoes off in the house. I am not a white-washed “banana” or a reserved young Chinese girl.

Each to our own – I’d say! We are all our own person, and I am tired of just “letting go” when I experience racism.